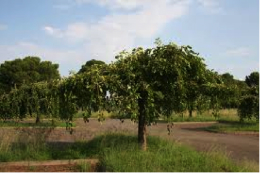 Origin of the mulberry tree

Mulberry trees are among the oldest known trees. In traditional Chinese medicine, they have been known about for over 5000 years and they also occur in the Bible. Zacchaeus climbed in to a mulberry tree in order to see Jesus. King David received instructions from God, in the treetop of a mulberry tree. There are 16 species, which grow all over the world in tropical, subtropical and even in the northern temperate zones. The white mulberry tree (Morus alba) deserves special mention. However, the main growing area is still in China.

Where does the knowledge come from that mulberry leaves are beneficial to health?

In Chinese folk medicine tea was brewed from mulberry leaves, which was used against fever and colds, but also to preserve the youthful skin and black hair.

For centuries, the mulberry leaves were used mainly to feed silkworms who eat virtually nothing else. When silk was the finest fibre of choice, before synthetic fibres were discovered, large Mulberry plantations were found in Italy. These plantations in Italy have since almost totally died out and are mostly forgotten.

Recently, medical research undertaken in Japan has been responsible for a resurgence of interest in the healing properties of the mulberry leaves. The FAO (Food and Agricultural Organization of the UN) designated mulberry leaves as an ideal food for cows and other ruminants in 1990.

Mulberry leaves contain 15 – 25 % protein, which for a plant is a very high proportion. The abundance of nutrients when compared to green tea are seen below: (based on 100 g of dried leaves)

It is important to note that, compared to Green Tea, mulberry leaves have 6 times more calcium and twice as much iron.

Which ingredient has a health effect?

Yet these factors around vitamins, minerals and trace elements is not what is of particular interest. Much more important is the content of amino acids, saccharides and phytochemicals. There are around 17 different amino acids to be found in mulberry leaves (building blocks of proteins), especially aspartic and glutamic acid.

Among the saccharides (sugars) we find sucrose, fructose, fructose and glucose. Various healing effects are the result of the flavones (rutin, isoquercetin, including carotene amongst others, a total of 3.3 g per 100 g). The absolutely spectacular thing about mulberry leaves is an alkaloid called 1-deoxynojirimycin (DNJ). This has a proven effect in diabetes mellitus (sugar diabetes) and is a substance that currently is not found in any other plant in the world. 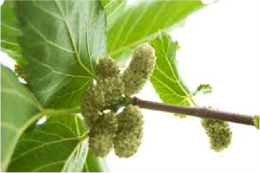 How does this combat high blood sugar?

Mulberry leaves can thus be used for DNJ and GABA as a natural remedy for diabetes. In a comparative study with the diabetes drug glibenclamide (eg. Daonil, Glibenorm) 3 grams of mulberry leaves per day have lowered blood sugar more than the drug.

In addition to the main effect for the treatment of high blood sugar, other effects are also seen. Mulberry leaves lower cholesterol, by blocking the absorption of cholesterol from the intestine. LDL-cholesterol and triglycerides are reduced, however, increasing levels of "good" HDL cholesterol. 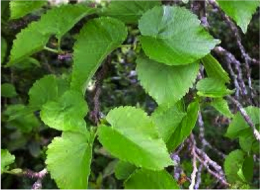 The mulberry leaves also have an effect of lowering of blood pressure (approx. 10%) and acting as diuretic. This not only increases water excretion by the kidneys, but also removes excess water from the cells.

Finally, also the "historical" effects are to be mentioned, which already were known to the ancient Chinese, namely as a cough mixture, for fever and for a cough with sputum. Only suspected, but not proven, are positive effects on the stomach, intestines and liver.

There also appears to be some effect against cancer resulting from the content of catechins and tannins. These polyphenols occur in many other plants, and are known as scavengers, which are anti carcinogenic substances. Mulberry leaves are therefore not primarily indicated for this disease.

The following diseases can be treated with mulberry leaves:

Diabetes mellitus Type 1 and 2
Vitalstoffmedizin
Definition of  Diabetes Type 1Previously diabetes was referred to as either the young or the elderly diabetes. These days it is referred to as Type 1 or Type 2 diabetes. In Type 1 diabetes, the p...
The intestine is an underestimated organ.
Vitalstoffmedizin
The intestine is an underestimated organ. The intestine is a neglected but fascinating organ. On the one hand, the intestine is something like the central training camp of the immune system. This...
SALVE! - Mit sekundären Pflanzenstoffen gegen Krebs
Vitalstoffmedizin
"Salve!" So grüsst man sich z.B. im Tessin und es bedeutet wörtlich "sei gesund" (aus dem Lateinischen, oder auch "retten" vom italienischen "salvere"). Ja, der erste Teil dieses Namens kommt tat...
Burnout
Vitalstoffmedizin
Chronic stress and burnoutToday, stress is omnipresent for many people. The burdens on the workplace have tended to increase, even in our leisure time a lot needs to be undertaken and done...
Losing weight - But how?
Vitalstoffmedizin
Losing weight - but how?Overweight as a global problemGlobally, it is estimated that 2 billion people are overweight. That is about a quarter of the world's population. In Switzerland, in 2012, there ...