What is Emu Oil? 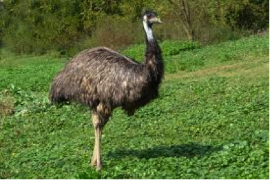 The emu (noave hollandiae) is a ratite (flightless birds) that lives in the wild and is only found natively in Australia. It’s appearance is very similar to the African ostrich, although they are not related. In North America, Peru and China the emu is breed on big farms. The meat is very low in fat and tastefully and most of the fatty tissue is found in a thick layer directly under the skin. The emu can reach speeds of up to 50km/h. It can grow as tall as 180cm and weighs around 55kg when fully grown. There are around 700 000 birds in the wild in Australia. Emu’s eat mostly grass, seeds, berries, fruits, herbs and insects and Emu young also eat meat.

How is the emu oil harvested?

On its back the emu has a little hump, which contains an oil reserve. This oil is removed and is refined with a kind of clay and/or chemical, there after it is sterilised. We recommend buying refined emu oil, even if it is slightly more expensive.

The composition of the oil:

In addition, Emu oil is rich in vitamins A and E, minerals, lecithin and antioxidants 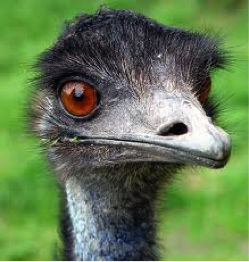 Emu oil is tolerated well and is absorbed quickly by the first few layer of skin, locking in moisture. It could thus be an outstanding base for use in the cosmetic and pharmaceutical industries.

The proven characteristics of emu oil are:

How to use emu oil:

The oil is to be rubbed on evenly to the painful, wounded or reddened skin areas, several times per day. Emu oil in this form is not to be taken orally. Specially prepared emu oil capsules for oral consumption can be purchased.

Emu oil can be used to combat the following diseases and conditions: