Many people know Q10 from the advertising for anti-aging care products. But it would be a pity to limit Q10 to its effect on the skin. Q10 is basically needed by every cell in our body to ensure the energy supply. And it can do even more!

What is Coenzyme Q10? 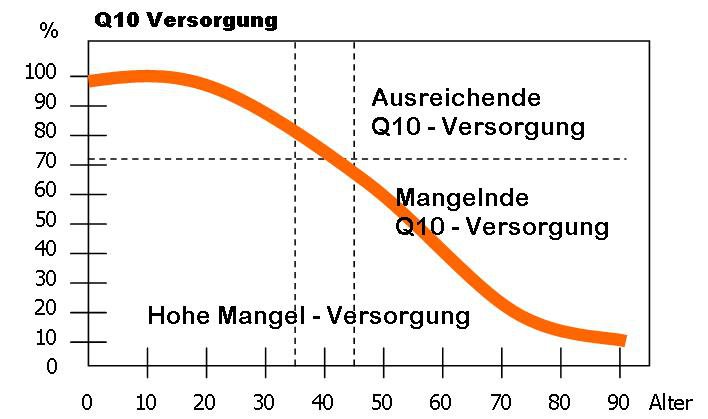 Coenzyme Q10, also known as Q10, ubiquinone-10 or UQ, is a fat-soluble molecule that is similar in structure to vitamin K and vitamin E. Most people are familiar with Q10 from advertising for anti-aging products, so many think it is just a beauty product. However, it can do much more than ensure a firm skin, which is not bad at all.

Ubiquinone is a very important endogenous coenzyme that occurs in every cell of the body (ubiquitous = everywhere) and has a decisive influence on the formation of the universal body energy ATP (Adenosine Tri-Phosphate). Q10 is one of the crucial nutrients for energy production in the tiny but powerful mitochondria. These are the power plants that work for us in each and every one of our body cells. In the mitochondria, the energy we consume via carbohydrates, fats or proteins is converted into ATP together with oxygen and the power of water. This process, in which many other enzymes and vital substances are involved, is also called the respiratory chain. Coenzyme Q10 plays an important role in the last step of the respiratory chain. Most Q10 is needed by organs with high energy consumption such as the brain, heart, liver, kidneys, pancreas and, in sports, the muscles. However, Q10 is basically urgently needed by every cell in our body to ensure the energy supply.

But it can do even more!

Even a Q10 deficiency of 25% causes damage to the mitochondria, the tiny cell organelles that produce ATP, which can lead to a noticeable loss of energy. In the course of life, the body's own production decreases continuously. With an increasing deficiency of Q10, the risk of disease also increases. One example is dementia: every brain cell has hundreds to thousands of mitochondria that depend on Q10! The lower the Q10 level, the greater the risk of dementia. Q10 also inhibits inflammation and intercepts free radicals (antioxidant), which is also important in the prevention of dementia.

Q10 is the only fat-soluble antioxidant that can be produced by our body itself. However, this amount is too small, so we have to supplement Q10 with our food. However, there is no food that contains a particularly high amount of Q10, so a balanced diet is crucial. Most Q10 is found in the flesh of organs (e.g. liver), oily fish (e.g. sardines), nuts (e.g. pistachios), pulses, sesame seeds, sunflower seeds, vegetable oils, cabbage, onions, potatoes, spinach, Brussels sprouts and broccoli. However, the coenzyme can be destroyed by boiling. Gentle preparation is therefore important.

When is supplementation with Q10 indicated?

Supplementation can be recommended as a preventive measure from the age of 50 onwards, especially if problems with reduced energy are already noticeable or if medication is taken which reduces the Q10 level as a side effect. By the way, nobody makes a mistake to be well supplied with Q10. The positive effects e.g. on brain and heart function and life expectancy are proven beyond doubt. If you take Q10 as a dietary supplement, bioavailability is highest when you consume fats at the same time. 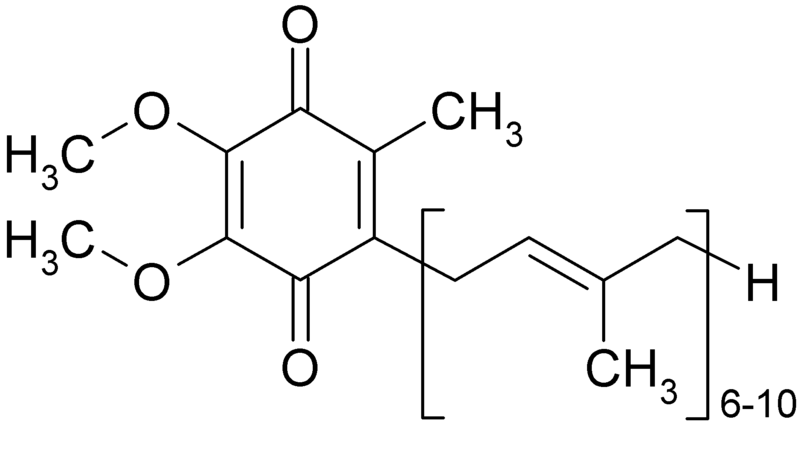 The cholesterol-lowering statins (CSE inhibitors) and beta-blockers considerably reduce the Q10 level as a side effect, in the case of statins it can be over 50%. Tricyclic antidepressants also lower Q10 levels. Anyone who has to take statins because of high cholesterol (note: a level below 7.0 mmol/l is normal and does not need to be treated, a cholesterol level below 5.0 mmol/l is even more dangerous than too high a level!

Are there side effects of coenzyme Q10?

Q10 has no side effects in therapeutic doses up to 2400 mg/day! At even higher doses, which makes no sense therapeutically, diarrhoea and nausea can occur.

What is the difference between ubiquinone and ubiquinol?

Ubiquinol is the reduced form of ubiquinone (a reduction is a chemical reaction in which electrons are transferred from one molecule to another). Ubichonol and ubiquinone are 2 states of an identical substance.

The dosage naturally depends on the disease and its severity, it is between 100 and 500 mg daily. The capsules are taken throughout the day before meals. A lower dose is sufficient for prophylactic replenishment of the Q10 level and is recommended for 3-6 months.

Liquid Q10 in soft gel capsules is best absorbed in the intestine. Preference should be given to natural products and not synthetically produced ones. The Q10 Vida, produced with a patented lipid-based process, is very well absorbed in the intestine and the plasma level is significantly higher than with other products during 24 hours. Therefore I gladly recommend this product.

Here is the study:

Coenzyme Q10 may cause a have a preventive or curative effect:

More than 5000 studies about Q10 are published on pubmed.org

The most important ones:

Depression
Vitalstoffmedizin
Are antidepressants disease causing?Serotonin is an important messenger and neurotransmitter. Since 1965, researchers have suspected a link between depression and a low level of serotonin in the brain...
Prevention and protection against flu - Vaccinating yes or no
Vitalstoffmedizin
Prevention and protection against flu  -  to vaccinate or notEvery autumn, many people ask themselves the question: should I have the flu vaccination or not?  We are officially offered ...
Losing weight - But how?
Vitalstoffmedizin
Losing weight - but how?Overweight as a global problemGlobally, it is estimated that 2 billion people are overweight. That is about a quarter of the world's population. In Switzerland, in 2012, there ...
Vitalstoffe bei Autoimmunkrankheiten
Vitalstoffmedizin
Das ImmunsystemUnser Immunsystem ist höchst komplex, schlicht ein Wunder, es sichert unser Überleben im Kampf gegen die unzähligen Krankheitserreger, mit denen wir tagtäglich in Kontakt kommen können....
Crohn's disease, chronic bowel disease
Vitalstoffmedizin
The definition of Crohn's DiseaseThis insiduous disease is a chronic inflammation which can occur anywhere between the oral cavity and the rectum but occurs most commonly around the small intestinve. ...