In the past, people have believed that spicy hot food harms the stomach. Yet quite the opposite is true. For this reason hot spices are rarely used in Switzerland. Originally from South America, there are over 400 species of chili in existence, but differ in their severity.

Capsaicin is the vital substance responsible for the pungency and the medical effects of chilies.

The capsaicin is only found in the marrow of a chili pepper and not in the seeds. Capsaicin is chemically very consistent and is therefore not destroyed by cooking or freezing.

Once Capsaicin is consumed and the pungency is burning the mouth, drinking water does not help to alleviate the burning as Capsaicin is not water-soluble. Capsaicin is soluble in fat and alcohol. To stop the excessive burning in the mouth, it is suggested to eat a yogurt, cottage cheese or a piece of cheese. Sherry or tablespoon of vegetable oil is also helpful to reduce the burning.

Why does chili burn?

The capsaicin mainly stimulates the nerve endings of heat nerves in the mouth; especially those on the tongue*. These nerve endings then pour out a chemical messenger, called a neurotransmitter that enlarges the tiny blood vessels and hence the entire circulation. The burning in the mouth is perceived as pain by the brain, which in turn triggers the release of endorphins (a type of happiness hormone). So hot-eaters appear affable and happy, they are on a so-called "pepper high".
Note: chili powder in the air leads to burning eyes and irritation of the nasal and bronchial mucosa. Take care when coming in contact with chilies not to rub eyes as this will result in unpleasant streaming and burning of the eyes.
You can get used to the pungency, because the taste or pain nerves are not affected.

The pungency of chilies

Here are some examples:

Note to the cook 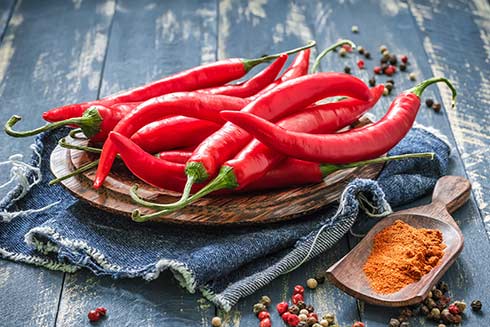 Spice Pepper and chili are indeed two very different things, but there is no better combination than those two. Spice Pepper (piperine with the vital material) irritates the stomach lining, but on the other hand improves the utilization of nutrients in the gut crucial. Spice Pepper also prevents the formation of gas in the intestine. So basically it is good to cook with lots of spice pepper and protect the stomach with chili.

The medical effects of capsaicin

Capsaicin boosts the production of mucus of the stomach lining. The protective layer of mucus becomes thicker and the stomach is better protected from the gastric acid necessary for digestion. This has a very beneficial effect on stomach burning, reflux and even a stomach ulcer.

Furthermore, Capsaicin and other substances contained in a chili stimulate the production of endogenous cortisol. This is important for burnout patients (see below). Cayenne pepper increases fat burning and can therefore be used for weight loss purposes. Chili leads to increased sweating, which in turn consumes more calories. Blood becomes more fluid and the blood vessels dilate, improving circulation and preventing embolisms. Yet, that’s not all: Chili strengthens the immune system and also exhibits an excellent cancer protection factor. If you consume a lot of ginger, turmeric and cinnamon in addition to pepper and chili, you will burst with vitality well into old age.

Cayenne as an alternative to acid blockers

Proton pump blockers are prescribed en masse and are often taken permanently by suffers. This, despite the fact that acid blockers do not have a positive effect in about a third of patients. In the case of an irritable stomach, they only help in 10 to 15 percent of cases and unfortunately, not at all in the case of an irritable bowel. Nevertheless, in these cases the patient often just has the prescribed dosage increased – to no avail. The proton pump blockers inhibit gastric acid production. This protects the stomach from acidity and stomach burning or reflux can improve. Studies have shown, however, that many prescribed drugs can damage the kidneys and lead to chronic renal insufficiency after years of use. The body can also less effectively absorb vital substances such as magnesium, calcium and vitamin B12. This increases the risk of osteoporosis and bone fractures. In the less acidic stomach, dangerous bacteria can more easily survive and cause severe gastrointestinal infections. Finally, food intolerances can arise, because some of the food enters the intestines undigested. Cayenne pepper is a much better alternative. Instead of suppressing acid production, Cayenne ensures that the stomach produces more mucus and thus protects itself more effectively against the acidity! In this way one gets both: an acidic stomach, necessary for the digestion and defense of unwanted bacteria and a gastric mucosa better protected by more mucus. The stomach becomes calmer, less cramped, is protected from excessive acidity and allows the esophagus to rest.

People under stress produce more cortisol in the adrenal cortex. It has an anti-inflammatory effect and ensures that the body has the energy it needs in stressful situations. However, the adrenal gland is only able to produce large quantities of cortisol for about 3 years. It then collapses into a state of exhaustion with a rapid drop in the cortisol levels. This results in the symptoms of burnout, a state of complete physical and psychological exhaustion. In addition to the usual medical care and support, Cayenne-Pfeffer Burnout can help those affected to stimulate the production of the body's own cortisol, which is now low or missing. This allows patients to get back on their feet more quickly.

Cayenne is the following diseases have a preventive or curative effect

It is best to swallow 2 - 3 small dried chili pods (size 5-10 mm) from the health food store or a capsule of chili powder after each meal. 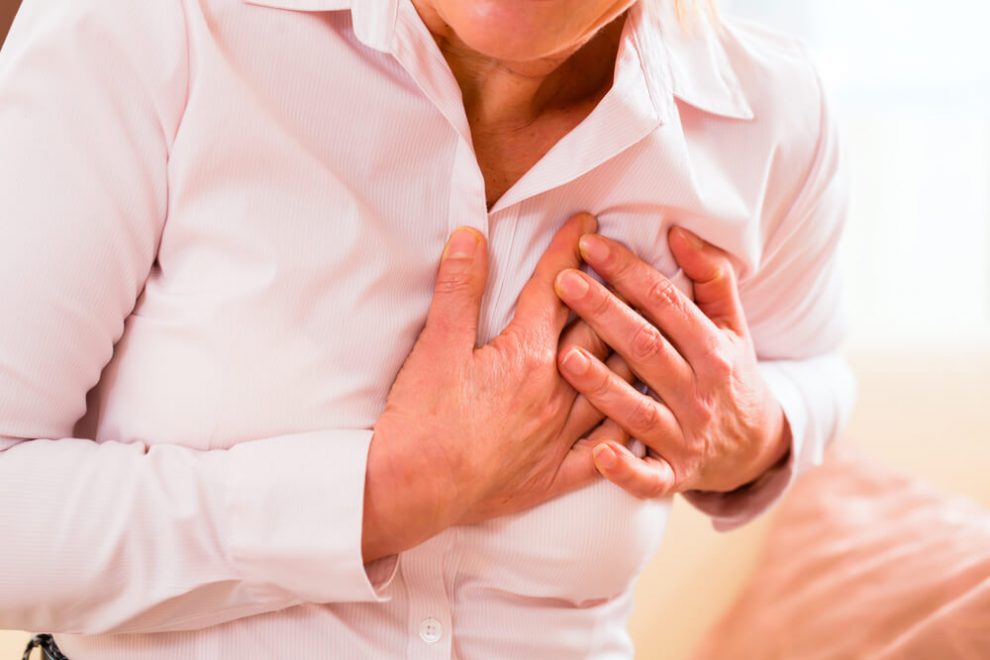 One bit of advice for heart attack patients:

If you permanently carry a nitroglycerin capsule with you, in order to quickly react to an angina pectoris, you could also take along a chili-capsule. In case of an emergency, you empty the chili capsule into a glass of water and drink it immediately. The anginal attack is degenerated at least as fast as a nitroglycerin capsule if not even faster. If a chili capsule is swallowed whole, it takes a little longer, because the capsule first has to be resolved in the stomach.

Competitive sports and nutrition
Vitalstoffmedizin
Competitive sport and nutrition Institute for Sports MedicineSALUTO is the largest centre of excellence in the German-speaking world for top athletes. It is led by the sports scientist, Prof. Dr. Elma...
Hoffnung bei Autismus
Vitalstoffmedizin
Neue Studien weisen darauf hin, dass Menschen mit Autismus-Spektrum-Störungen geholfen werden kann, indem man zuerst ihren Darm in Ordnung bringtAutismus-Spektrum-Störungen (ASS) Der Begriff «Autismus...
Sugar consumption declared harmless in bought studies
Vitalstoffmedizin
The sugar-coated lie: In the 1960's, the US sugar industry deceived consumers in a similar way to the tobacco industry. Scientists and researchers were paid to present sugar in a positive light and pl...
The intestine is an underestimated organ.
Vitalstoffmedizin
The intestine is an underestimated organ. The intestine is a neglected but fascinating organ. On the one hand, the intestine is something like the central training camp of the immune system. This...
Depression
Vitalstoffmedizin
Are antidepressants disease causing?Serotonin is an important messenger and neurotransmitter. Since 1965, researchers have suspected a link between depression and a low level of serotonin in the brain...